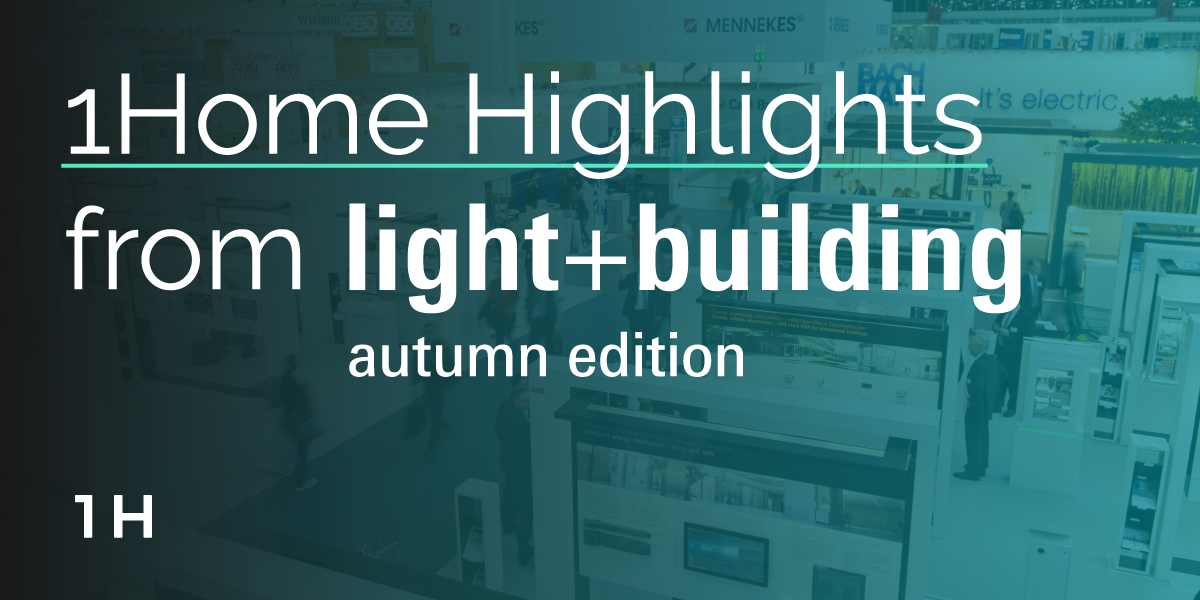 After 4 long years, the Light+Building fair returned. Of course, the 1Home team was there, ready to tour the show and scan the booths for all the novelties!

Light+Building is by far the biggest and most important show for KNX that has been going on since 2000 and happens every 2-years. Usually, Light+Building happens in March, but this year, because of COVID, it has been moved to October. We can see manufacturers have been waiting for this show to drop new products and services as there definitely was above average amount of novelties being presented. We have highlighted a couple of them that we found the most interesting.

Gira presented a couple of novelties this year but we were the most impressed by the new Gira One environment which is aimed at simplifying the planning and configuration procedure of the KNX smart home installation process. To quote Marco Strelow, the Gira sales representative for central, eastern and southern Europe - “My son is 11 years old and with Gira One, he could do the whole KNX project”.

How is it possible for a company to make every product look as beautiful as Basalte does? Amazing! But since everybody is talking about the Basalte design, we decided to focus on the technical side of their ecosystem. Domien de Coninck explained to us how everything works together and how they achieve the technical level that matches their cutting edge designs.

We also took a closer look at Adelante, the new intercom solution for multi apartment buildings. It looks stunning (are we repeating ourselves? :) ) and with the “selfie-like” camera on the intercom itself, they truly elevated the user experience.

Next, we visited one of the giants of the industry - Schneider Electric. Schneider’s product manager Annika Nähring presented their new modular push button solution - Push Button Dynamic Labeling System D. We know that the KNX planning phase rarely produces the configuration of push button panels that are ideal to use in real life as well. This is why it’s so great that with this product we can reconfigure the individual push button panels after already moving into the house or apartment - with no additional physical work to be done.

Since Schneider Electric is one of the founding members of the Connected Standards Alliance which is responsible for releasing the new wireless smart home standard - Matter - we also wanted to know if Schneider is planning to update some of its products with Matter Support. Jürgen Eckert explained to us, how their Wiser system hub will shortly be augmented with Matter functionality.

Our friends from south Tyrol, Divus, are also a regular at Light & Building. Four years ago they launched their Red-Dot awarded doorphone solution - Circle. This year they unveiled the updated functionality and design of this product, which was presented to us by Federico Leverato, the project development lead at Divus. We also talked about their new wall mounted touch screen, with an integrated KNX server and KNX Data Secure - Divus KNX IQ. Its beautiful design, and a clean and user-friendly app is what makes this device the only visu server you’ll need in your KNX project.

During the fair we met with Theo, the famous Greek KNX blogger Poseidon Tech, who told us about the revolutionary radar based presence sensor from Vimar. We discussed details on that wonderful device with Matteo Pagotto,  the marketing product manager of Vimar. He told us that the sensor can detect your breathing, which can seriously improve full lighting automation in KNX equipped buildings and homes. It can also detect falls which makes it very usable for serviced apartments and hospitals as well.

Once again we were amazed by the fair here in Messe Frankfurt and all the novelties presented. Even though there were less people at the fair (compared to the previous shows), we felt like the amount of business being done has grown. Thank you to all the exhibitors for having us. And of course, see you all at the next exhibition!

Our fourth survey was aimed at security & safety - it’s one of the most known functionality clusters since many customers decide on purchasing a smart home system with better security in their minds.…

We want to develop the product our customers love, that's why we’re always reaching out to see what pumps you up and what lets you down. In the past month or two, we’ve gradually upgraded the 1Home Dashboard, focusing on requests submitted by smart home integrators.…